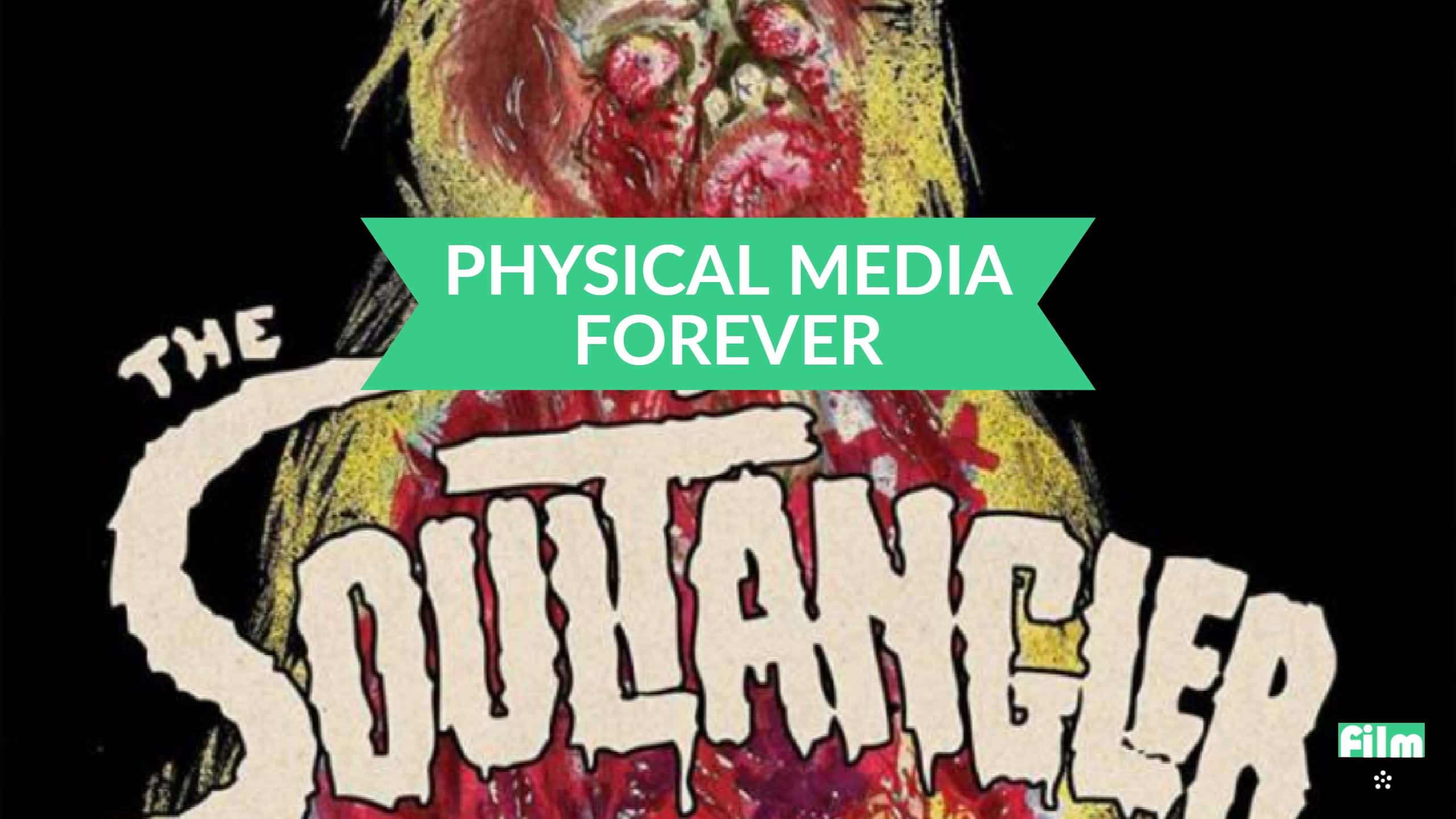 “I always fast forward this part” – The Director of The Soultangler watching his own film.

When I was a burgeoning cinephile, I wanted everything to be an extension of THE EVIL DEAD, DAWN OF THE DEAD or DEAD ALIVE. The movies didn’t have to look expensive, but they had to have a general filmmaking acumen.  wanted gore. I wanted energetic camera moves. I wanted energy. Anything that didn’t tick those boxes I dismissed out of hand.

Oh, how the times have changed.

I still enjoy splatter films, but I’ll be the first to admit that the promise of a few head explosions (probably digitally enhanced) in a mid-budget DTV film doesn’t really do it for me anymore.

But no-budget regional films? Now those get me excited. 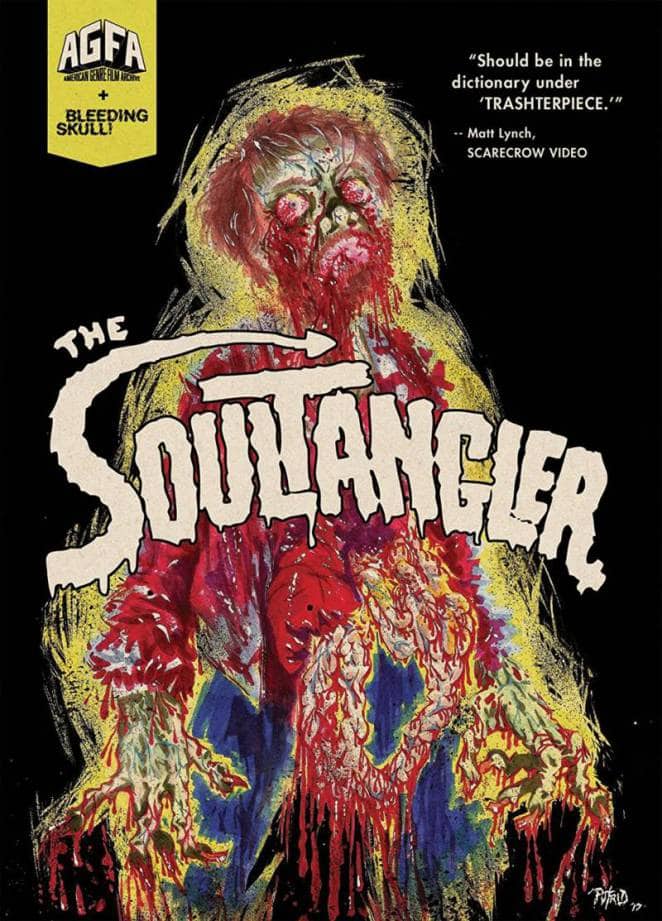 The Soultangler was made by Writer/Director Pat Bishow in 1987, shot on 16mm for 8,000 dollars, and filmed around Long Island. The back of the box seems to indicate the story will be about a Herbert West like Re-Animator (played by the director’s brother in law) and his evil corpse possessing powers. And it KIND of is. But the true meat of the film is made up of non-actors spouting monologues in wide shots that are held for an uncomfortably long time, lots and lots of cars driving, people walking, and vistas slowly rolling across the screen as the same musical theme gurgles its digital refrain.

Kind of boring? Of course, it is. But it’s a very specific type of boring that can border on (to borrow a term of phrase from Paul Schrader) the transcendental.

For me, an individualistic (and cockeyed) expression of filmmaking is worth more than a dozen slick (but dull as dirt) DTV ghost films. The regional horror films look like something you’ve seen before, and their inspirations are obvious, but the best of them pull it off with an eyebrow-raising decision making.

Why does the camera suddenly jerk to the side in the middle of a shot, hold on an empty street, and then cut the next scene? Or why do we hear a muffled conversation happening off-screen over a scene of the same actors mouthing something completely different? Why did the camera cut to that skull with a tarantula crawling over it for the fourteenth time?

Sure, the answer boils down to a lack of finesse and money to pull off what everyone had in mind, but the end result is so odd, that the logistics of its creation don’t matter. All that matter is the film – an out there take on the works of H.P Lovecraft that seems to have been beamed in from a mirror dimension.

For the gorehounds, there’s some pretty amazing stuff on display in the climax. The special effects maestro trots out a Practical Effects Demo Reel that includes a half-head tongue guy, a zombie with its guts hanging out, and a living brain with moving eyestalks. 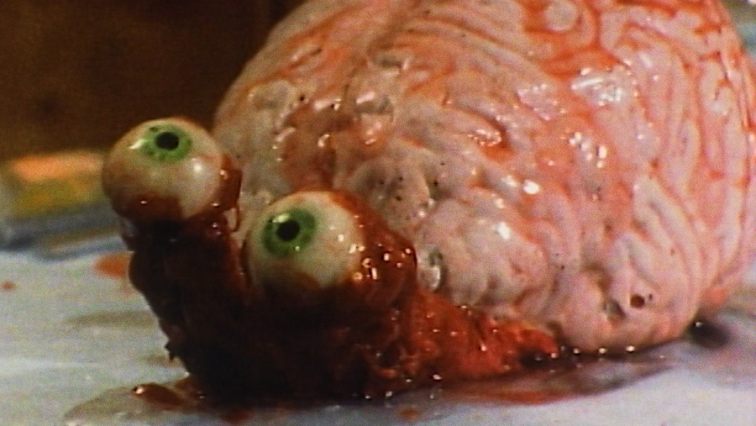 On the amazing new DVD release of the film, Director/Writer Pat Bishow hosts one hell of an energetic commentary track, worrying in the first few minutes that he won’t be able to fill an hour, and then launching into a breathless break down the movie, the problems he faced, and a hundred useful filmmaking tips along the way.  I’ve said it before, but there’s something invaluable in a release like this, where a creative person can reflect over their entire career on one disc. “I made this movie for 8,000 dollars and sold it for 70,000” Bishow says with a sigh at one point, “I thought I’d do this forever.” He ended up directing corporate videos.

The AGFA/Bleeding Skull release of this film is impossibly well put together. There’s beautiful new cover art (with the original VHS box on the reverse), a booklet on the film and a bevy of special features. The Soultangle was shot on film but completed on video, so the movie looks as good as it ever will. There’s a twelve-minute montage of behind the scene footage, a music video the director made, and a trailer for another one of his 80’s films. There’s a Director’s Cut of the film – which is only 62 minutes. The story goes that the first cut of the film came up short, and because no distributor would accept a 62-minute picture, they padded it out to 90 mins (driiiivvvvinnnng fooooootaaage) in order to sell it. I watched about half of the director’s cut, and while still weird, it’s missing the kind of dreamy feel of the longer cut, which is a different experience. and if you’re 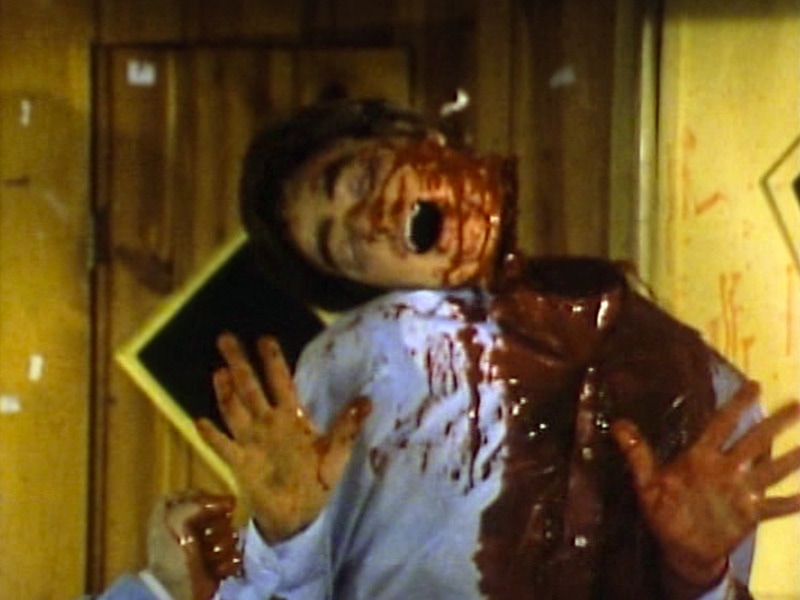