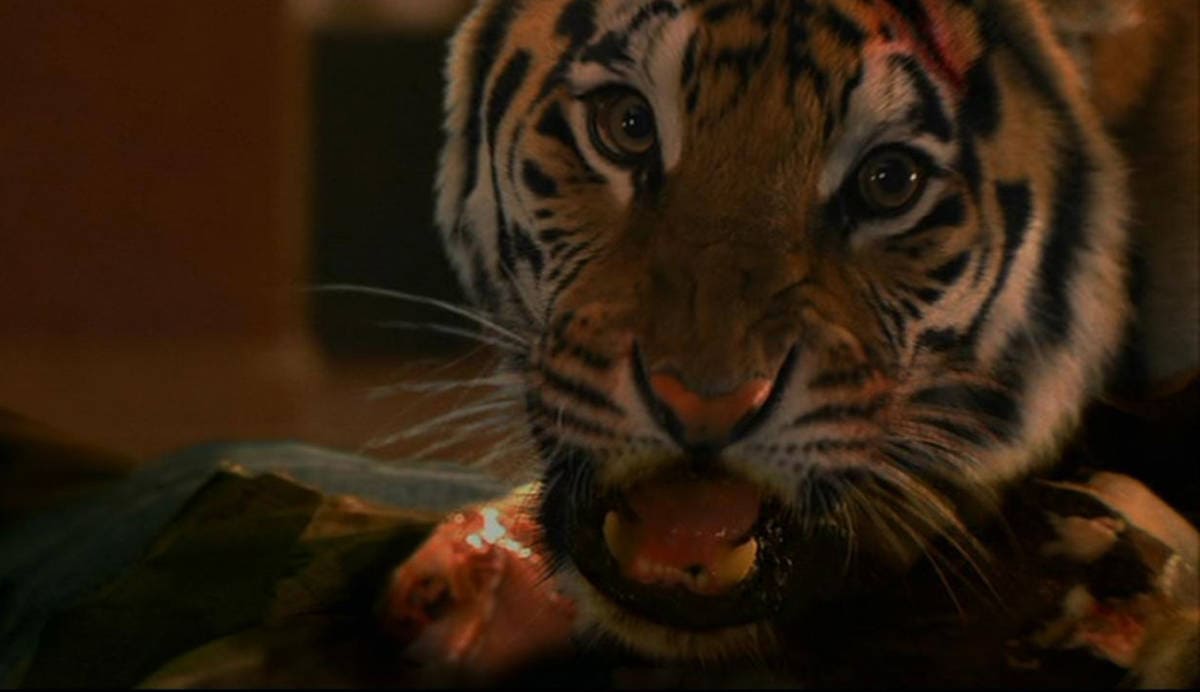 “Burning Bright” is apparently based on a poem from 19th century English Romantic Age poet William Blakes called “The Tyger”. I would not be offended, nor would I know if you took the time right now to go and read this short poem. I recommend you take note of the line where he mentions the half naked woman, and the hurricane…go ahead, I will wait….. 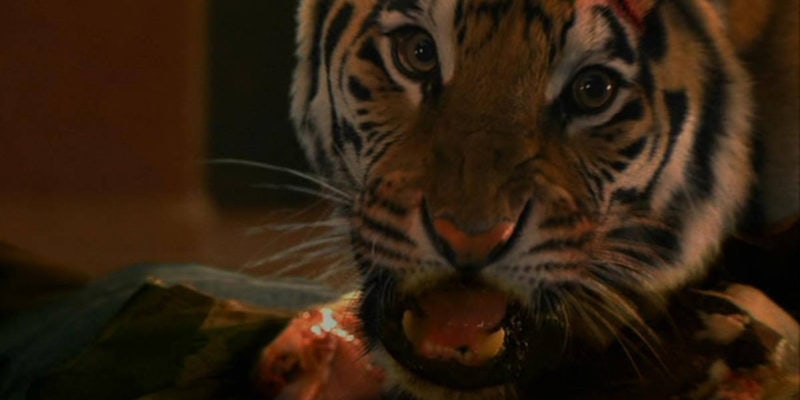 Yup, I know what you’re thinking…no half naked woman, or hurricane mentioned. Well, I am no poet or student of poetry, but it seems from what I have read that “The Tyger” speaks of a personal spiritual revolution. Telling of the force inside an individual that helps push them past their own established rules and experiences. But, if you were to take it in a more literal sense, it is less about the inner fierceness of the soul, and more about a half-naked woman physically fighting a tiger….in a hurricane.

In its defense, it would make a really good Heavy Metal cover.

So, we have established the plot of “Burning Bright” is a few shades of ridiculous, and I absolutely love it. Not so much the finished product, but the plot itself. Not only does our heroine have to take care of her autistic brother since her mom committed suicide, but her stepdad also wants them dead so he can cash in on secret insurance policies that he took out on them. His amazing plan is to trap them in his house one night and release a man-eating tiger to devour them. His timing couldn’t be better too, as the hugest of huge hurricanes is on its way, and there is no escape. This plot has more than it needs to be a really silly film. I am pretty sure at the writers meeting they threw around a few more ideas to add to this, but they were ultimately cut out due to budgetary reasons. Maybe talk about adding fire rain, maybe there was going to be a plague going on outside, a nuclear bomb strike, or even cash in on the zombie craze and make the tiger an undead which turns other animals into killer animal zombies… What I am getting at here is that it really felt like someone had the base idea of a pretty girl defending herself from a killer tiger, but realized that idea needed a lot of other issues to stretch it out for the paltry 70 minutes that make up this film. Well after taking away opening and closing credits. So, I guess the original plot, “Sexy girl in wet t-shirt and panties gets eaten by a tiger” just didn’t fill enough screen time on its own.

I did very much enjoy the great Meat Loaf cameo at the beginning of this film. Mr. Loaf works for a circus that no longer wants the aforementioned killer tiger. Apparently having circus goers run from your tent screaming bloody murder is not good for business. Lucky for the nameless circus, our main characters stepdad is in the market for a dangerous killer man-eating tiger. What luck! The tiger hand off is done at a sketchy closed down gas station on a basically abandoned highway, like all good and legal transactions are done. Although, in fairness, The Loaf does his due diligence and asks to see evil stepdads killer tiger purchase and transfer permit…I am assuming that there are actual killer tiger purchase and transfer permits that exist in real life. I feel like this alone should bring up some red flags. Out of the blue, a man wants a killer tiger for his rich people safari business. I feel like more questions should have been asked at the permit office. Still, after a quick once over of the permit, the Loaf man seems satisfied that the man in front of him is an upstanding member of society who has taken the time to fill out all the proper forms, leading to the purchase of a killer tiger. Happy to be rid of the beast in such a legal way, Meat Loaf takes the time to explain to the animals new owner the ins and outs of owning a tiger. Some of these tasks include not feeding it for weeks, to show it who’s in charge, not touching the cage, and keeping it away from the pretty things in the world. You see he tells our murderously minded dad that this tiger killed and ate a circus show horse during a live performance. The scary and totally true part is that it skipped a bunch of the other horses to snack on the prettiest, and sexiest horse of them all. I assume she was a unicorn and her name was Lady Rainbow Hooves. This moment is the all important, and again completely factual explanation of how tigers hunt by attacking the sexiest of prey. Also, it is the official reason given for this tiger being evil. 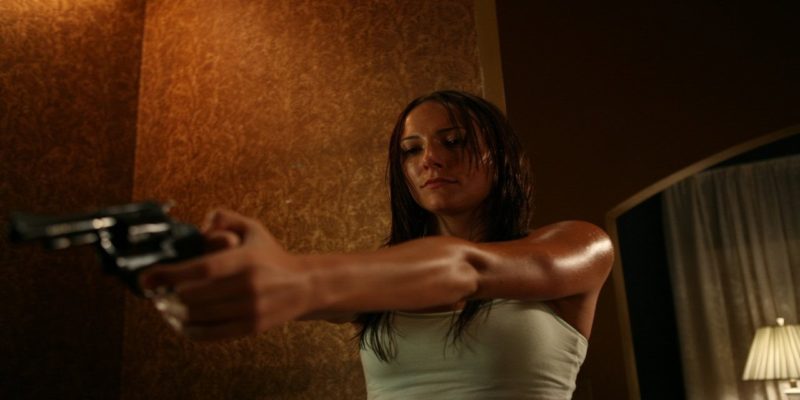 We find ourselves in a boarded up house with a tiger, an autistic boy yelling the word “Eat” over and over again, while wandering off all the time, and his half-naked constantly soaking wet sister. Also, we now know tigers don’t hunt by smell or sound. Nor do the wait in stillness, stalking their prey unseen. They prefer to wander around their hunting ground until accidentally bumping into their prey. But, remember that tigers always skip the weak and helpless meal like say, an autistic boy who wanders basically into their mouths and go right for the half naked girl, because of course, she is the prettiest. All real tiger facts! I do admit I like when the tiger takes the time to smash the girl’s cell phone on purpose. This is also a real thing tigers do in the wild. Smashing a wildebeests cell phone means tonight we eat well!

As much as I want to, I can’t complain about the acting. Everyone did a pretty good job with what they had to work with. You can tell the tiger and the cast were never in the same place together, and yet there was a real sense of fear on the lead actresses face. So there is that. Yet, no matter what the DVD cover told me, I didn’t really feel the tension in this film. Most of it consists of lead up, and during the actual hunt part, our heroine, and her tiger chow brother barely get a scratch. The tiger spends more time laying the hurt on the seemingly infinite amount of the houses white wooden doors. All the while our lead actually spends most of her time leading her brother around as he chases down his mom’s old clothes. You see, Tommy, or Timmy….The autistic brother has an obsession with their deceased mother. He steals her old clothes, watches old movies of her, and completely ignores the killer tiger. This completely fear filled, almost being eaten by a tiger experience culminates in an ending that kind of hints that the brother just got over his autism and is ready to move on in his life…which to be honest, I am pretty sure that is not how autism works. 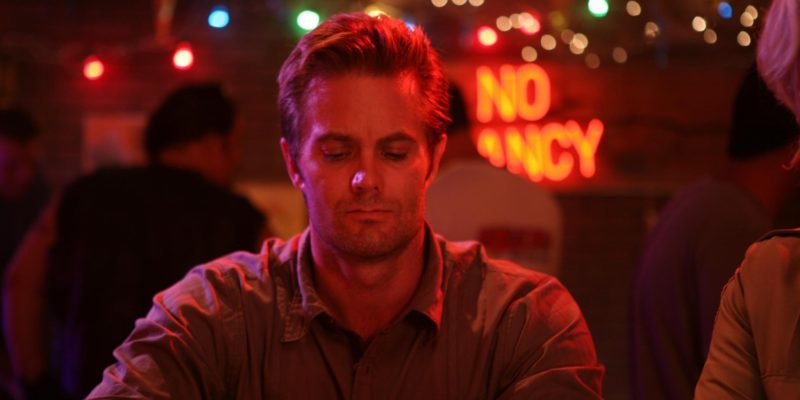 I am sure some people will find more to like in this film that me. Even if it is just the constant parade of a wet t-shirt covered underwear-clad woman wandering around her home at butt level to the camera. Just remember as you are watching this, It must be a legitimate good film because it was based on a classic poem. With maybe a bit of modification…

Chase this girl all through the night

Pounce, and claw with lots of flair,

as we zoom in on her underwear.

Do not fret about her bro,

He is not the way to go,

He’s autistic, so don’t be hasty,