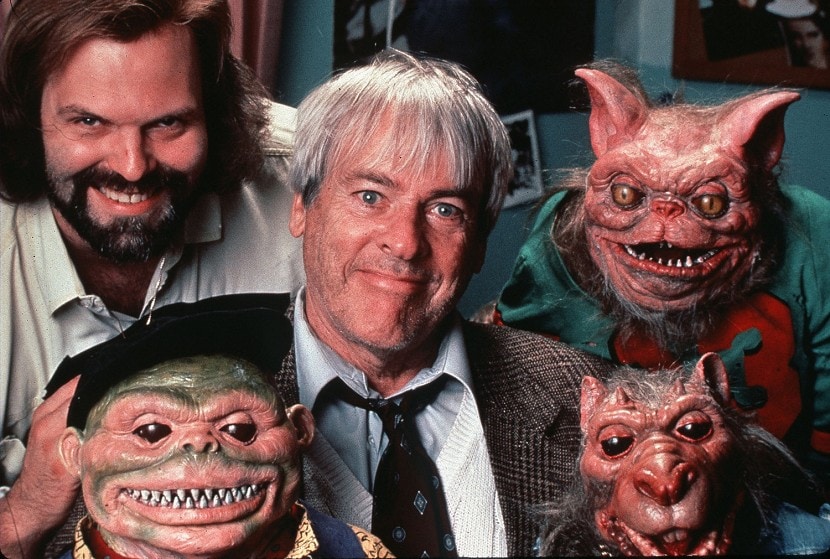 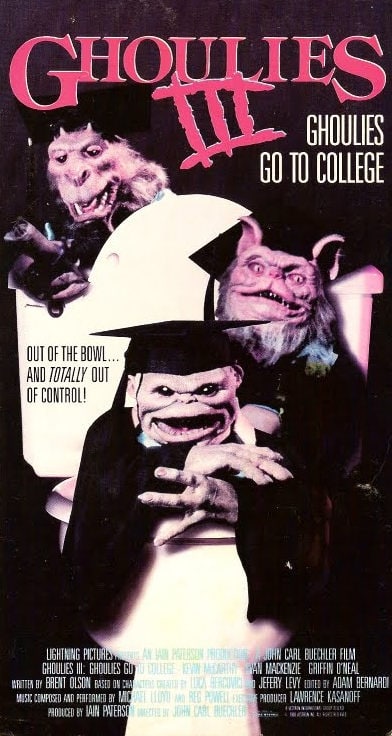 I think I’m thinking too hard about this.

As the bald ghoulie rocking a wicked six pack would say: 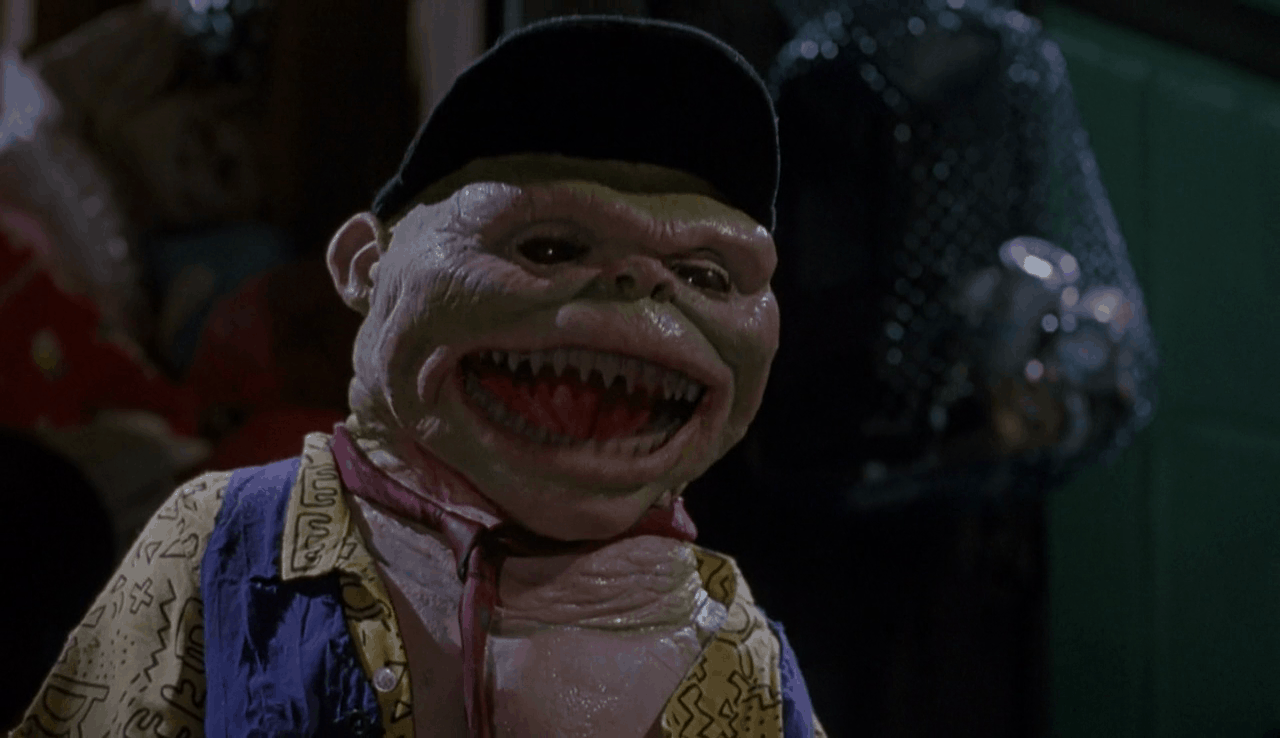 Directed by special effects maestro John Carl Buechler (of original TROLL fame) GHOULIES 3: GHOULIES GO TO COLLEGE is a Warner Bros cartoon made flesh. It’s the Direct to Video equivalent of GREMLINS 2: THE NEW BATCH but much much much much dumber. The ghoulies, who starred silently in the first two lame-o films, are now wise cracking goofballs that love bloodless murder and breaking stuff for fun. They can decontrolled by a comic called GHOULISH TALES and they are summoned onto a college campus during the week where two fraternities are in a heated PRANK WAR. So, what’s a live wire ghoulie supposed to do? Make trouble of course! The ghoulies get drunk, murder a few people (a lot less than you’d expect) and quip…and quip…and they never stop quipping holy shit they won’t shut up….

Shot with a surprising amount of energy by Buechler and featuring your money’s worth of GHOULIE mayhem. The cast is a game group of thirty somethings pretending to be cool college teens, there’s quite a few naked ladies (including Hope Marie Carlton of Hard Ticket to Hawai), and the villainous dean is played by the great Kevin Mccarthy – the definition of an actor who can always go more over the top. There isn’t a second wasted on trying to create suspense or horror. The dumb rubber puppets just want to rock! How much silliness can you swallow? Do you find someone being strangled by their own tongue funny? Or puns about it being a rough knight (as a ghoulie is stuck in a suit of armor) hilarious? THEN THIS WILL BE YOUR FAVORITE FILM OF ALL TIME. I watched the first ten minutes with a pal who turned it off in disgust an sold the DVD the next week, but another friend raves about it as a holy grail.

This is a film for people that love silly rubber puppet monsters running around. 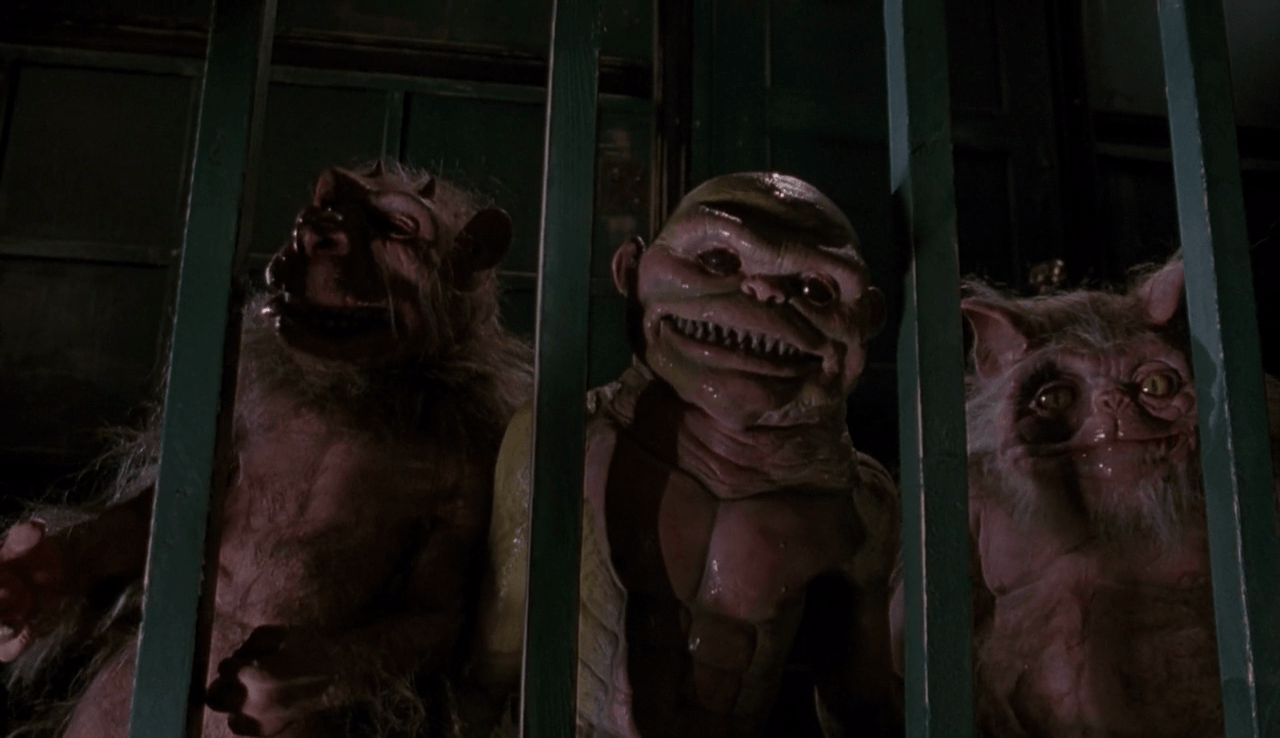 The real question is, why are we as species, obsessed with monsters coming out of toilets so much? The film’s VHS box hypnotized me as a kid and Producer Charles Band said that after they shot the promo cover, it was so popular they had to film a new scene of a toilet ghoulie because theater goers were angry. THEY WERE COMPLAINING THAT A MONSTER DIDN’T POP OUT OF A TOILET!

Don’t worry. There’s a magic toilet in this one.

The biggest sin of GHOULIE 3 is that it never achieves the ecstatic beauty of this moment from GHOULIES 2: THE GHOULIES GO TO A FAIR, I GUESS.