Hamilton’s Trash Cinema: You’ll Never See Anything Like It Ever Again 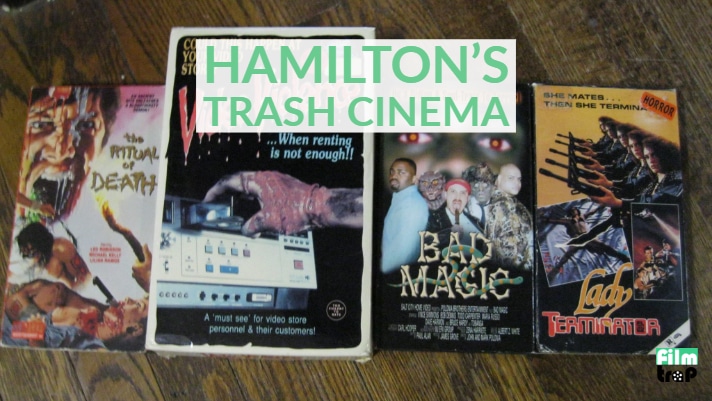 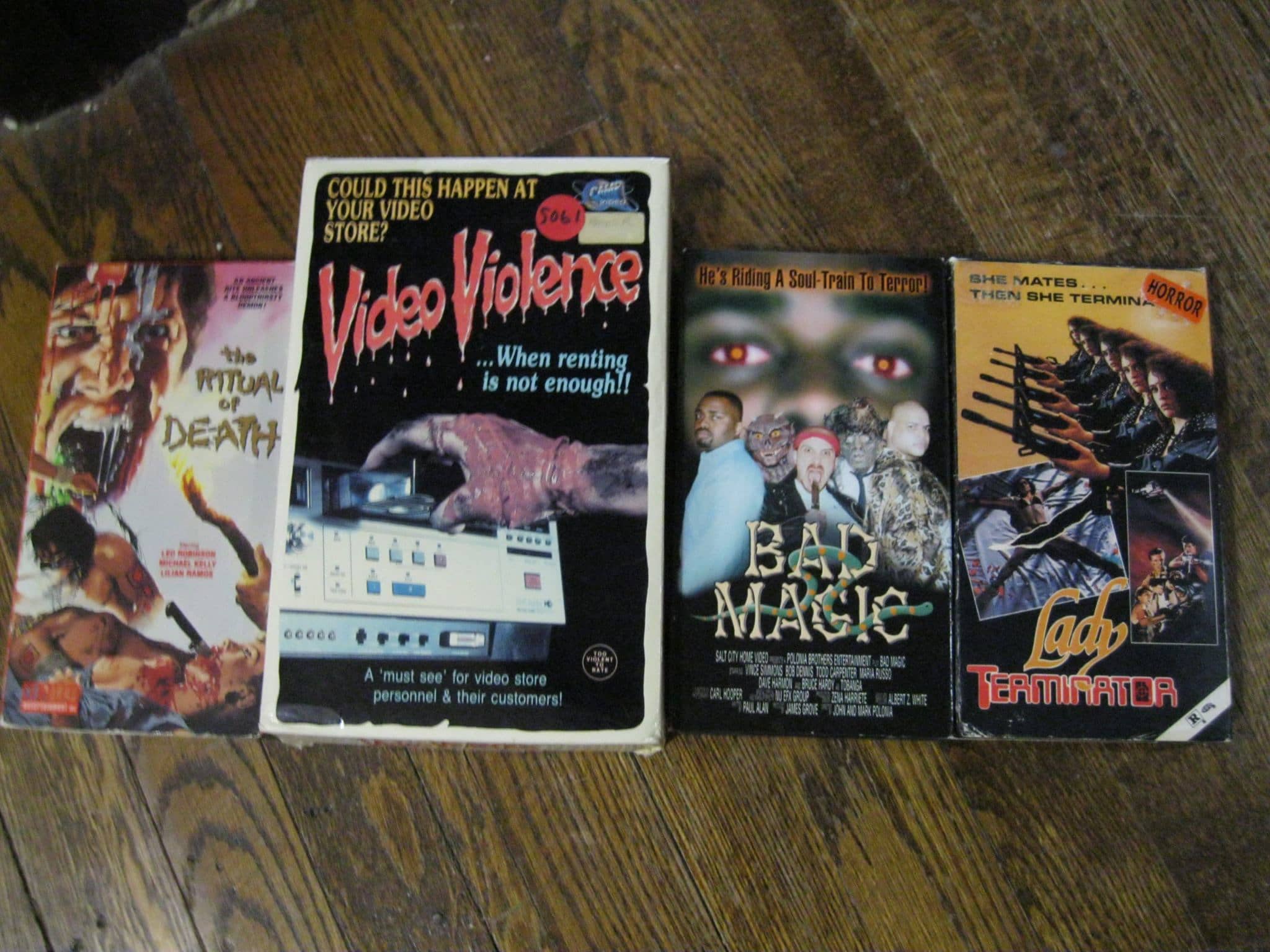 I accidentally stumbled on the Hamilton’s Trash Cinema page on Facebook years ago and assumed it was just a place where the admin could post photos of the rare VHS tapes he acquired – and I didn’t recognize half of the movies that popped up!  The ones I did recognize were the trashiest of the trash: Moldy slabs of shot-on-video poison that would melt the mind of the strongest cinemagoers and dry up the throat of the most fervent “Bad Movie” fans. I love that kind of grungy junk, but I had to assume the “Cinema” part of the page’s name was just to make it catchy. I didn’t believe anyone would actually put on a public screening of something like Crazy Fat Ethel.

Well, I was wrong.

But it must only be a handful of the programmer’s friends that show up, right? There’s no way a random audience member would sit through something like Gore Whore! 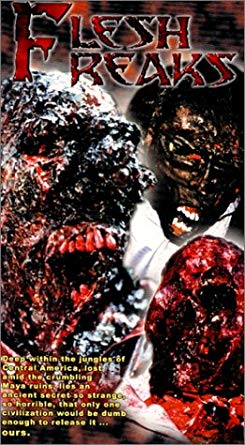 “There were about 30 people when I went,” Conall Pendergast told me. He had directed a zombie film called Flesh Freaks in the early 2000’s while in high school, and while it had gotten distribution through Sub Rosa Entertainment in the early years of the DVD boom, it had been banished to the 100 HORROR FILM packs you’d find at the bottom of Wal-Mart bargain bins for the last decade.

Out of the blue, the programmer and founder of Hamilton’s Trash Cinema reached out to Conall on Facebook and invited him to attend a screening of Flesh Freaks at his monthly Trash Cinema screenings.  Conall said the audience was respectful and surprisingly into his micro-budget oddity.

I had to witness this phenomenon with my own eyes. 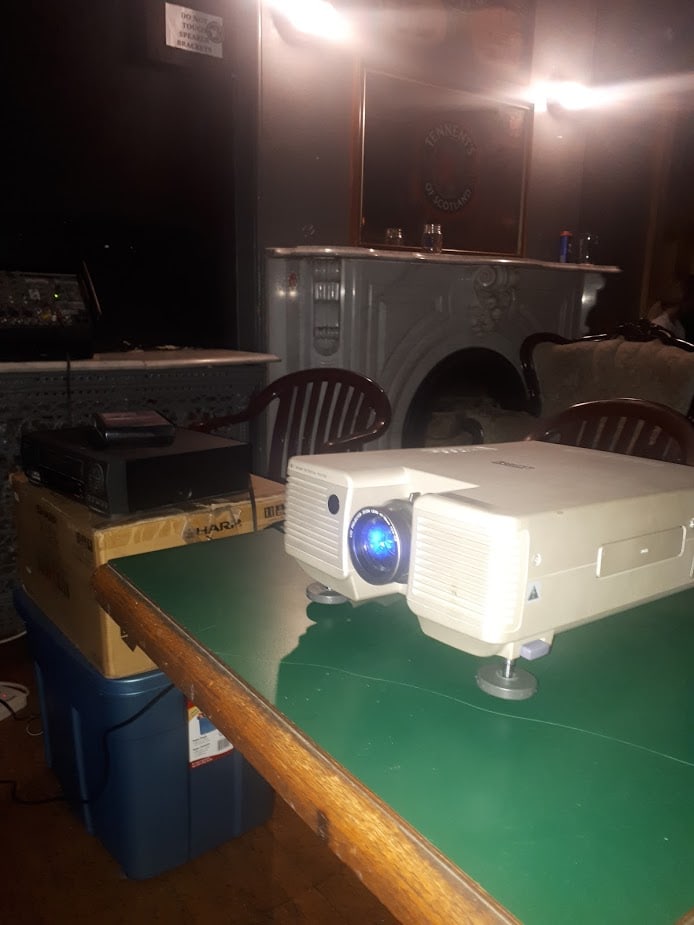 The screening took place in downtown Hamilton on the second floor of the Doors Bar. The space is a classy mid-sized room, with a bunch of antique chairs mixed in with bar seats, and a small chandelier dangling from the ceiling.  The room filled up with what seemed to be a mix of die-hard attendees and curious teenagers. The founder and programmer, Ben Ruffett, set up a white blanket against the wall, turned on his ancient video projector, performed a quick introduction, and popped in the tape.

The night’s film was Doctor Bloodbath (1994) by Nick Millard – a particular uneventful roughie from the king of Shot on Video garbage who gave us such wonders as Cemetery Sisters (1987) and Dracula in Vegas (1999). Bloodbath plays like Chantal Akerman’s Jeanne Dielman, 23 Commerce Quay, 1080 Brussels if the story followed a sleazy abortion doctor who brutally murdered his patients. Mr. Bloodbath goes about his work in a bored stupor, hangs out with his nagging wife, and fantasizes about stabbing tomato sauce covered baby dolls. There’s no narrative to speak of,  the ‘actors’ mumble their lines and move like they just learned to walk, and the titular ‘bloodbath’ is a handful of repetitive murder scenes made up of the Doctor’s squinty gaze intercut with random women screaming so loud it distorts the audio. Eventually, the Doctor picks up the phone and tells the ineffective police that he was the murderer all along. THE END.

It was amazing to experience with a crowd. 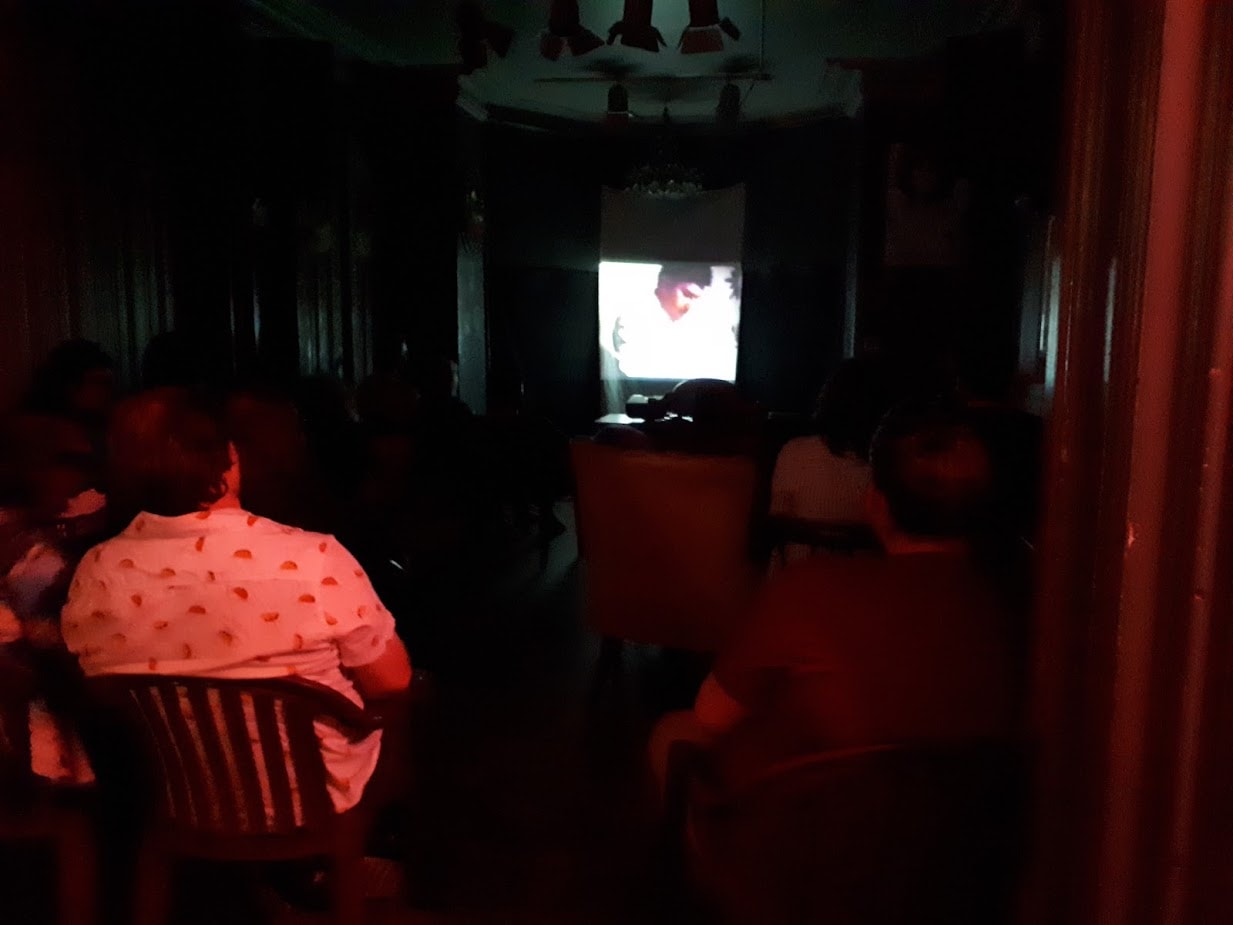 If you watched Doctor Bloodbath alone at home, you’d probably get bored and distract yourself with something more stimulating. If you were with friends they’d probably go “Is there something more FUN we could watch?” and you’d move on to some predictable ‘bad’ movie like Mac & Me.

You would totally be missing out.

“Did they just use footage from a completely different movie?” someone whispered as a clip from something shot on 16mm interrupted the shot on video visual aesthetic.

“I think that was from Crazy Fat Ethel.” a voice quietly replied.

We’ve all watched bad movies in a theater, but it’s a rare to experience something so completely ‘other’ with an audience of strangers. The films shown at Hamilton’s Trash Cinema were never meant to be experienced by a crowd. They were meant to be watched by baffled teens that were tricked into renting the film because it had cool (and misleading) cover art. At Trash Cinema, you’re forced to confront the art directly. You start to notice the repetition of shots, the little touches in the performance and the endless murder drone soundtrack. It wraps everyone up into a blissful video induced Stockholm syndrome.

The film ended and the audience broke into happy applause.

“Now, that was a good one.” a middle-aged man said as he headed out the door. He wasn’t wrong. 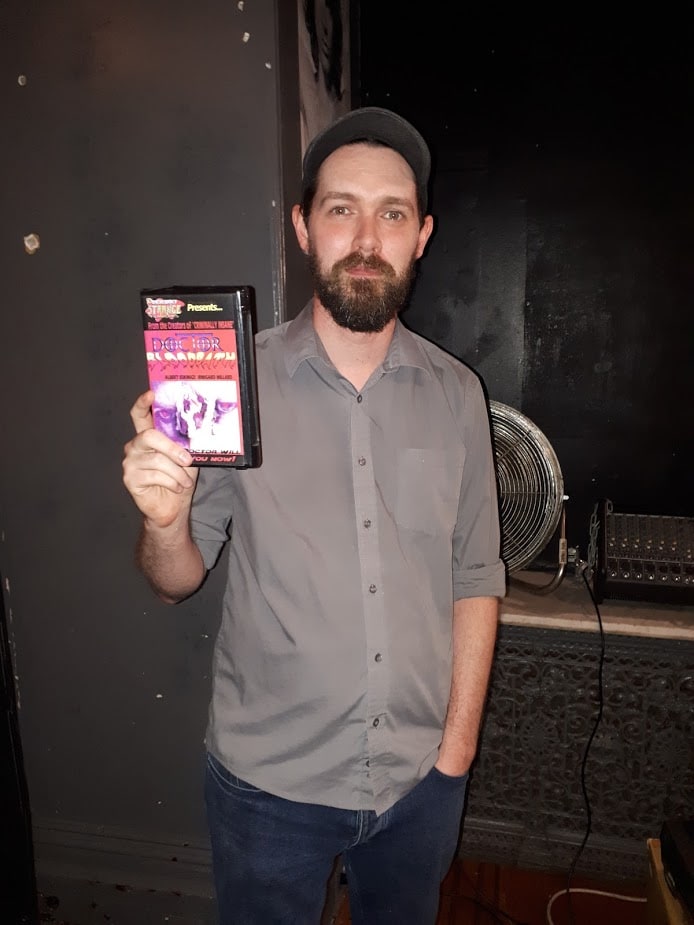 Hamilton’s Trash Cinema founder and co-programmer Ben Ruffett loves the movies he shows without a trace of irony or malice.  His tastes lean toward films that feel like they were beamed from outer space, the ones that were shot in the 80’s and 90’s when the affordability of video cameras allowed everyone and their grandmother to try their hand at movie making. The final feature-length results rarely made sense and were never exciting in a conventional way, but they are undeniably slices of pure individualist art.

“I never know what films will become people’s favorite,” Ben Ruffett told me after the screening “The ones I think will go over great sometimes fizzle and the ones that I feel are the most challenging are the most loved.”

“Has anyone been angry at you for playing a film?” I asked.

“It’s free, so no one has to stay if they don’t want to, but I can count on one hand when people have left. People always seem to enjoy themselves.”

Ben screens every film off an original VHS tape – the kind that would have sat on a shelf at a local Mom & Pop video store a few decades ago. Sure, he could plug a laptop in and play some of them off of Youtube, but there’s something special about hearing the vintage tape whirring away in a VCR player. The pops, the fuzz, and the tape dropout exist only in that particular moment, and can never be replicated. Most of the time, the tapes were made by the director’s themselves because they were self-distributed. “I created the ‘original tape’  rule and it turned into a bit of a sickness” Ben admits with a smile. The tapes he screens are not only rare but oftentimes the films he picks barely exist: There’s no IMDB page, no photos online and no clips anywhere. Ben finds copies by scouring VHS trading groups and reaching out to the filmmakers and their families.  A lot of the time the people he connects with haven’t thought about the film in years and are more than happy to help out. Other times, he’ll have to patiently wait for a film to pop up on eBay. Which may be a once in a lifetime event. 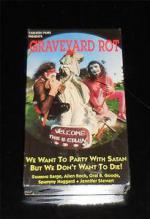 “Are there any holy grails you’ve always wanted to get your hands on?” I asked.

“There’s a movie called Graveyard Rot (1992) that I’ve dreamt of seeing for a long time,” Ben said, “I came close to grabbing it on eBay years ago, but got outbid by a few dollars, and have regretted it ever since.”

The film has no IMDB page. There are no clips of it online. There’s only brief review on the Zombie Media Database, and Ben believes it was written by the person that outbid him on the eBay auction.

“What’s the movie about?”

“Oh, I have no idea. I just know it has made by a heavy metal group and the cover has them standing around a gravestone above the tagline “We Want To Party With Satan But We Don’t Want To Die!”

“How much does a really rare tape go for?”

“An embarrassing amount of money.”

Yet, if Ben doesn’t grab some of those tapes, there’s a good chance they would disappear onto a collector’s shelf and never see the light of day again. Or even worse, be thrown in the trash.

Ben just wants to share the experience with an audience. His screenings are free, and he doesn’t make any money off of them, but he doesn’t lose any money either.

Most of the time.

“For the last two years, I’ve done a VHS double bill at the local drive-in. I call it my Lose-A-Money-A-Thon, but I love the idea of showing these films on the big screen. It’s just special.”

“Do you ever warn people about what they’re about to watch? Just to get them primed?”

“Well, when I did do the Drive-In thing, I stood in front of the ticket booth, and when cars drive-up, I say “You gotta see this great horror double bill. If you don’t see it today, you’ll never see anything like it ever again.”

If you’re a curious filmgoer in any way shape or form, you owe it to yourself to spend a night at the Hamilton’s Trash Cinema.

Or check out one of these upcoming screenings: