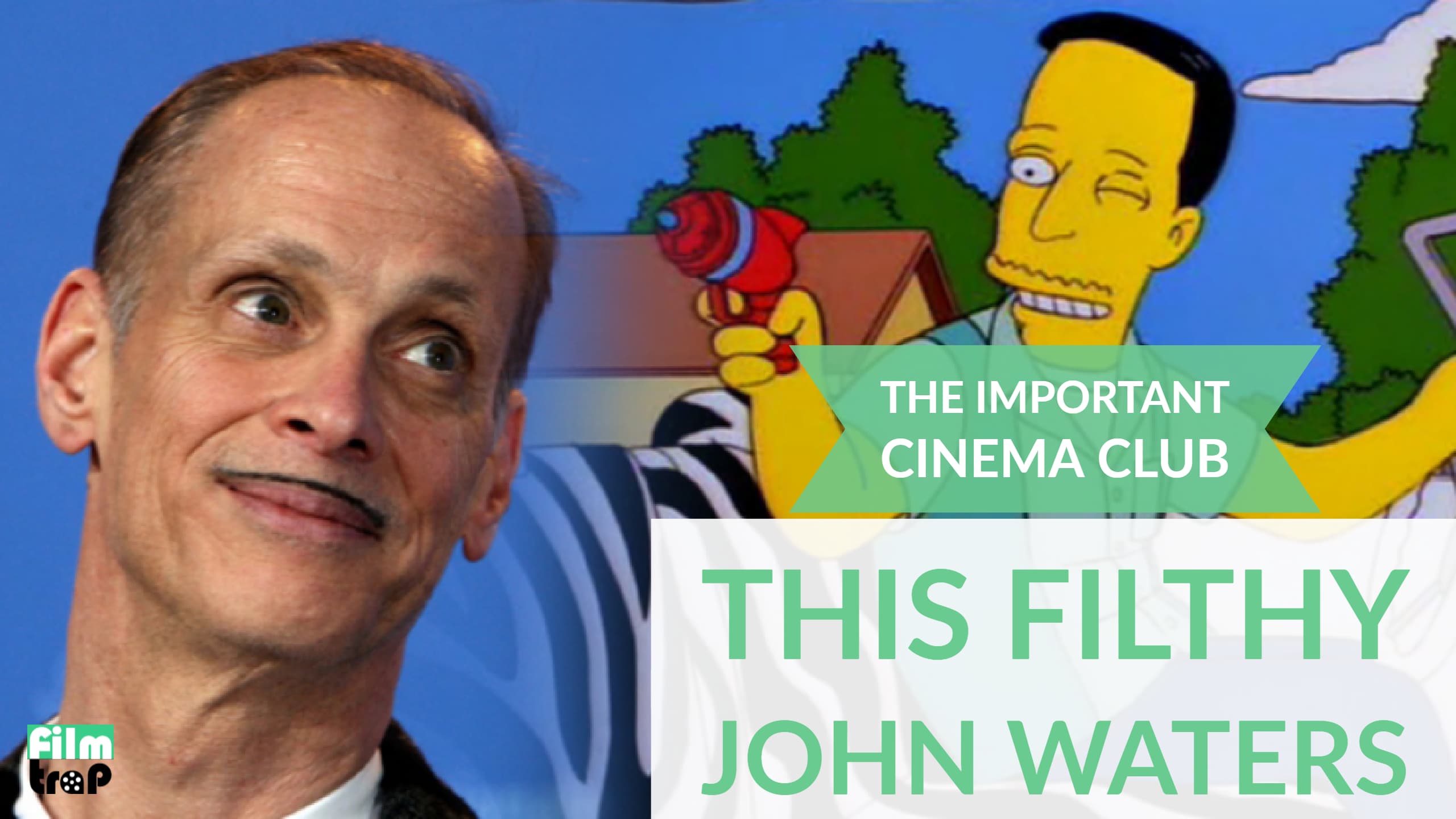 We talk writer/director John Waters with Richelle Charkot – The Programming Director at The Royal Cinema and the curator of the upcoming This Filthy John Waters Retrospective.

For more information on the retrospective check out: newsite.theroyal.to/movies

We have a PATREON! Join for five dollars a month and get a brand new exclusive episode of The Important Cinema Club every week.

Subscribe to The Important Cinema Club Podcast on Stitcher

Where to start with John Waters?

“A suburban housewife’s world falls apart when her pornographer husband admits he’s serially unfaithful to her, her daughter gets pregnant, and her son is suspected of being the foot-fetishist who’s been breaking local women’s feet.” – IMDB

“A spoiled schoolgirl runs away from home, gets pregnant while hitch-hiking, and ends up as a fashion model for a pair of beauticians who like to photograph women committing crimes.” – IMDB

“A teenager teaches 1962 Baltimore a thing or two about integration after landing a spot on a local TV dance show.” – IMDB

Tyler wrote to the podcast this week to ask:

“I find it amazing when you both talk about becoming avid movies fans at such young ages. I am 29 and just started to give into my love of cinema over the past few years. The sheer volume of great or important movies gives me choice paralyses at times and I can waste hours just trying to decide what to watch!

So – are you both able to put together a top 10 (or top 5) list of “starting point” movies? Movies that will start someone down various paths of discovery? Hopefully, this is different from a favorite movie list in some meaningful way.”

For more information on this topic, listen to the letters section of the ‘This Filthy John Waters’

This is an off-the-top-of-my-head list, which is longer than the listener is asking for. Sharing with you so we can avoid overlap.

-WATERSHIP DOWN – entry point into animation: at times mixed medium, could lead down a more experimental route
-ALL THAT HEAVEN ALLOWS/THE SWIMMER – entry point into melodrama: palatable stories and not quite as heavy-handed which might be off-putting
-STOP MAKING SENSE – best concert film ever obviiiioooooouuuusly
-THE SHOOTIST/HIGH NOON/THE LAST SUNSET – entry point into American westerns, super captivating and sometimes strange stories that don’t flounder like some other westerns do
-MOTHER JOAN OF THE ANGELS/POSSESSION – whacky Polish cinema that’s nothing if not fascinating and heartbreaking
-SWEET SMELL OF SUCCESS/KISS ME DEADLY/THE HITCH-HIKER – entry point to film noir

I picked 10 films that are a little lesser known to represent a whole bunch of diverse topics I enjoy, principally because I think there’s a stress that comes associated with watching ‘the classics’, and I would often put them off because of their stature. Sometimes it’s the side-entrances that are more accommodating than walking through the cavernous front doors.

The Adventures of Prince Achmed (1926)-  A firm example that early cinema can be as inventive and awe-inspiring as anything today- and it’s a feature-length animated film directed by a woman – an unfortunate rarity to this day.

Zazie Dans Le Metro (1960) – The French New Wave may seem intellectually daunting, but almost all of those films have a playfulness in their form – plainly seen in Zazie – a precursor to the Zucker Bros comedy.

The Big Clock (1948)  – A gateway film noir. Slick, self-contained, but creaky enough for it to add an extra layer of charm.

Night and the City

Godzilla vs the Hedorah (1971) – The Outliner Godzilla that has all the classic elements at their weirdest.

Last Year at Marienbad (1961) – A good entry into ‘art’ cinema that proves that you don’t have to ‘get it’ to find it dazzling.

Further research into the Art-house Canon:

The Cranes are Flying

Further Research into the Road Movie:

The Great Silence (1968) – The revisionist western at its most serious and artful.

Further Research into the Revisionist Western :

The Quick and the Dead

Tears of the Black Tiger

Save the Green Planet (2003) –  One of the most eccentric and dynamic debut of the 2000’s – emotional, fantastical and never not captivating. South Korea still produces new movies all the time, but no one talks about them enough.

Watermelon Woman (1996) – Cheryl Dunye’s meditation on the role of Black women in cinema is a vital piece of work that never got its due. A surface level CLERKS, as they both share the video store setting, but this one is much more satisfying and thoughtful.

The Bad and the Beautiful