I have seen “Passion Play” before today. Now, if you were to have asked me about it, I probably would have said. “It’s a movie where Megan Fox has wings and is a stripper or something like that.” You’d think I had forgotten about it because it’s straight out awful. But this movie has made me question why I remember some awful films, while I completely forget or block out others. The list of reviews I have done for this site alone shows that I have seen some really bad movies. So, why does my mind forget a bad movie like this, but remember a bad movie like “Hack’ O Lantern,” or “Miami Connection”

Prepare to delve into my psyche! (Thanks, Passion Play!)

Picture yourself in a world filled with scantily clad winged Megan Fox’s. Add a down on his luck Jazz trumpet playing Mickey Rourke, and a Killer pimp played by the ever delightful Bill Murray. As this new-found world of yours begins to flourish, it reveals a crazy traveling carnival, Mexican border crossers with high-powered sniper rifles, and tops it all off with Rourke climbing onto Megan Foxs back and flying away into heaven.

Bobs Psyche Sidenote #109 – That is the actual ending to this film, I didn’t make it up. See evidence below.

Now that you have properly fit yourself into this world let us explore a bit. After your first seven minutes in “Passion Play,” you’ll have witnessed Rourke’s down on his luck, trumpet playing, hat wearing man play sweet smooth jazz at a burlesque club. I know! How is that for some classy exploitation of the female form! Then we watch as he gets beaten up by Chuck Lidell, taken in his own truck to the desert to be executed for a crime we know nothing of.

He is miraculously saved by a group of what I can assume are Mexican border crossers with high-powered weaponry. They shoot Lidell, and run past Mickey Rourke, with nary a care for an autograph. This man was in “The Wrestler” people!!! Anyways, instantly forgetting his truck is just off screen, Rourke wanders the desert all night until coming across a mysterious traveling carnival. Paying one American dollar for entrance he goes inside with hopes of asking to use a phone. I am assuming to call a friend to find his truck in the desert and then come pick him up.

Here in this mystical carnival of wonders, he meets Megan Foxs bird lady Lily. He proceeds to peep on her no less than five times, drinks gin, sees an ape in a cage dancing to a strobe-lit rave, and gets into a fight with carnies. Then, minute eight of the movie starts. I admit that is a pretty crazy beginning to a film. Yet, it is like the burned themselves out, because after that, nothing of note happens. The rest of its 90 minute run time is used up with Rourke and killer pimp Bill Murray obsessing over and exploiting Megan Fox. 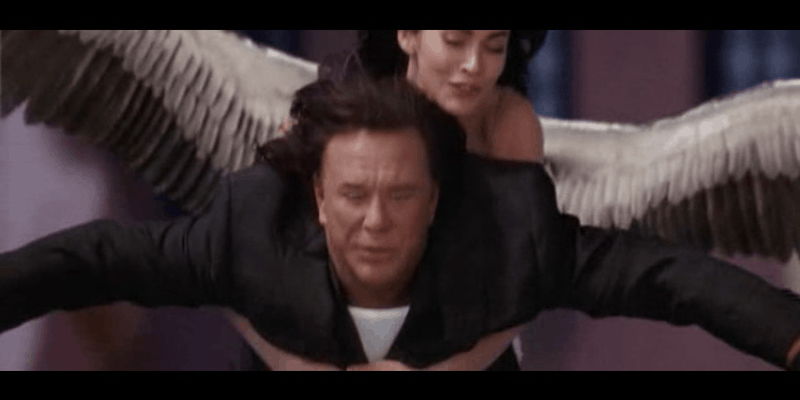 Who do they think they are Michael Bay! *Bam!*

Now you can see this world you’ve delved in unravel at high speeds. It doesn’t take long to realize that this movie is already out of its depth. There is a feeling like they tried to do something deep and spiritual. But instead “Passion Play” quickly becomes a story of a woman being sought-after as an object. The writer tries to hide a “real” romance between Rourke and Fox, but every man in this movie loves her through obsession. That and wanting to exploit her wings, and body for themselves. Even her real love interest in Rourke tries and succeeds to sell her off to a “killer pimp” for the back half of the film. Of course, he changes his mind after he gets to sleep with her. Because through sex, he can now truly love her more than the money he wanted for managing her career as a winged prostitute. Now, not all the lack of depth can be blamed on obsessed men and the low acting caliber of Mrs. Fox.

This movie is hampered by bad writing, and even worse, awful editing. Some scenes were cut so quickly that they were moments away from cutting off lines being said. Since we are picturing this world in my mind with its winged flying foxes and jazz playing Rourkes, Imagine that you are only allowed to see things in tiny snippets at high speeds. You’re in the desert, then a carnival, now a truck, hotel, truck again, hey it’s snowing, look that girl has wings, back to the truck, into a club, nice she still has wings and so on, until the end.

This is a movie that is supposed to show off its deep thoughts. But it’s too busy smashing through its storyline trying to get to the next scene with Megan Fox in a state of undress that there is no time to think. Is she an angel? Does this make you question your faith? Do they truly love her, or is she just a victim of obsession and exploitation? When I die does a half-naked Megan Fox Angel fly me to heaven? These are questions that are never answered, or in some cases not even asked.

Alright, that is enough time inside my psyche. It is time to leave on the back of a winged Megan Fox. 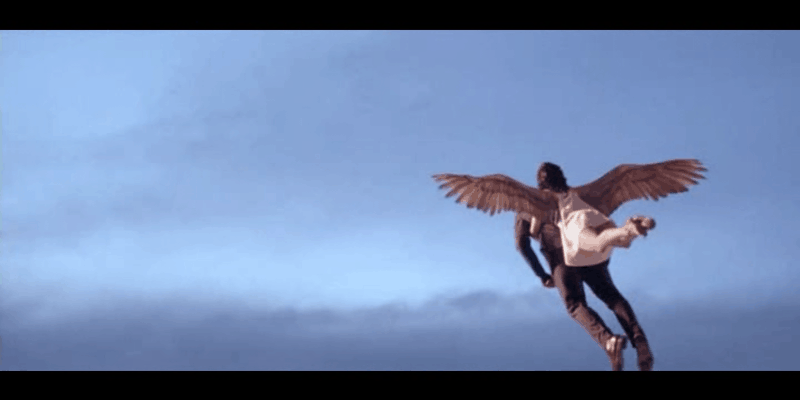 So, after all this, you are probably wondering what I learned about bad movies and what makes me remember, or forget them? Nothing. Honestly, I was too busy enjoying that last picture to really care.