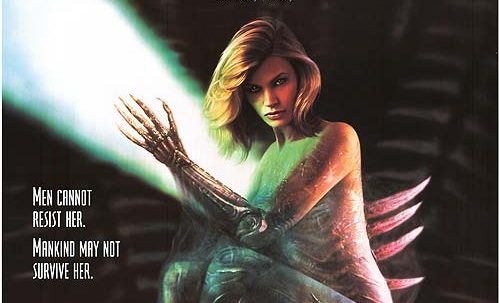 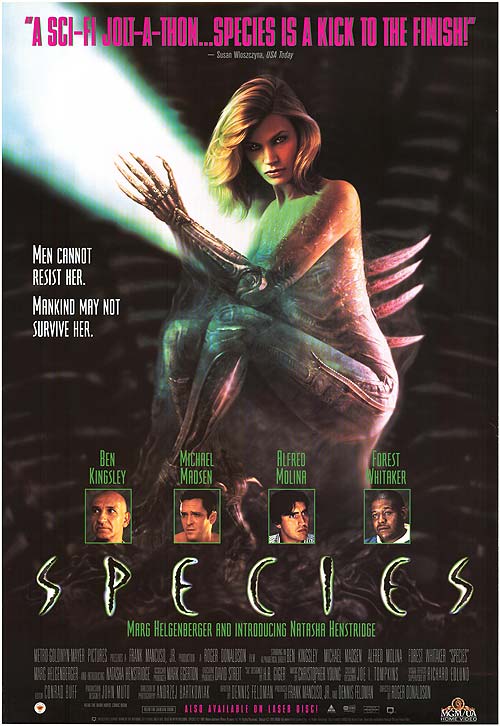 As a kid SPECIES was the ultimate example of “This is for adults.” It was advertised heavily on the back covers of all the comic books I read and you could almost see a boob! The VHS box said it was about a sexy female alien that slept with men and killed them! My little mind couldn’t wrap its head around the mixture of the two big taboos in civilized society finally smashing together into a piece of art that would undoubtedly scar me forever. As time went on, and I started watching more movies, SPECIES faded into the background as something that existed, but no one particularly loved. Maybe it was because I was still afraid.

Scream Factory recently put the film out on Blu-Ray and I realized that the time had come.  I heard people’s whose opinion I respect praise the film to high heaven. I was going to watch SPECIES. Would I be able to handle the non-stop onslaught of horrifying imagery that my young self had feared so deeply?

SPECIES is not good, but it sure is a weird cultural artifact. It’s the kind of film that you’d stumble onto on a PAY TV channel and go “Well, that was okay”. A studio monster film that feels like a lesser entry in the 50’s sci-fi cannon given a coat of big budget gloss to hide the fact that its ultimately hollow. The cast is a who’s who of C-level actors pushing against the barrier to B-level stardom. I don’t know what Monkey Paw wish Michael Madsen had to make to appear in so many films, but here he is at his non-Tarantino apex, mumbling and shrugging his way through a role in which he tells us he’s a bad dude, and then proceeds to nothing bad dude-ish. He’s teamed up with Forest Whitaker as a psychic em-path, Alfred Molina as a horny scientist (Uh-Oh!) and Marg Helgenberger (of every CSI series ever) as a another scientist that really wants to have sex with Michael Madsen. SPECIES posits Madsen is the most desirable man on earth. Even the Alien wants to fuck him! With all that stardom on screen, it’s surprising my retinas weren’t blown out of my skull, but thankfully none of the actors are give anything to do. The crack team of investigators chase after the alien for sixty minutes, never catching up with her, and then she blows herself up in a car (or did she?!). Then the investigator they go to a club to hang out.  Eventually, the alien attacks again. Everything ends with the surviving team members finally confronting the H.R Giger designed beast (it doesn’t happen till the last ten minutes) in a boring sewer- the pits of the monster movie climax. The End. Ben Kinglsey in this too, but his real conflict is with a shaky American accent. He would later go on to co-star with an extra drunk Madsen in Uwe Boll’s BLOODRAYNE

The real star is the always nude Natasha Henstridge as the titular alien , whose on the prowl to get impregnated. Her adventures killing skeezy men is the best part, because they’re accompanied  fun practical gore gags by Steve Johnson, which the film dolls out at survival ration level. The film is weirdly unsure how to approach a practical effect, either tossing them off with a shrug, or making it a hilarious 90’s CGI creation.

Directed by Roger Donaldson, a fiery filmmaker from New Zealand who was diluted in North America through cookie cutter films like DANTE’S PEAK and THE RECRUIT, the film is a journeyman’s effort at best. The cinematographer Andrzej Bartkowiak (the director of CRADLE 2 THE GRAVE) gives everything the off kilter look of every 90’s genre film. The thing with SPECIES is that I wanted more. I wanted more alien killings. I wanted more weirdness (Yes, I was not even satiated by tentacles shooting out of alien boobs). And I wanted protagonists that were active! I can’t survive on squirrel jump scares alone.

I hear SPECIES 2 is better?

I don’t know if I can face my fears a second time. Maybe I’ll go watch LIFE FORCE instead for my nude alien fix.