ICC #4 – Are you Smarter than Jean-Luc Godard? 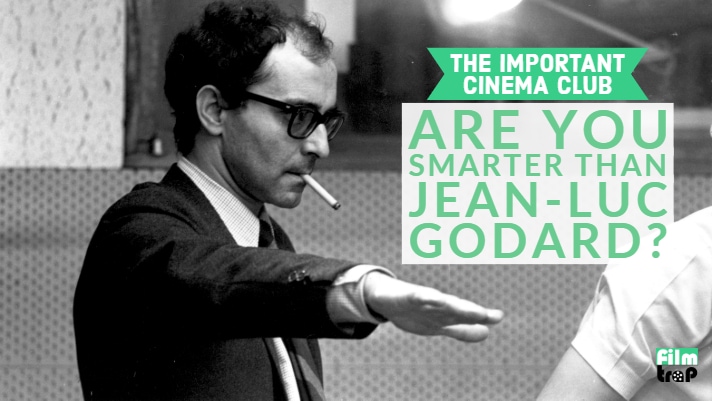 On this week’s episode, Justin and Will discuss the work of Cinema’s irredeemable bad boy by examining his films 2 or 3 THINGS I KNOW ABOUT HER (1967) and HAIL MARY (1984). They talk about the people who love the grumpy jerk (which includes Will), the transition from Godard’s golden age to his “What the hell are you talking about?” age, and his legacy in the History of Film (not to be confused with Godard’s History of film). We both come to Godard from a different perspective, so the debate is lively, inquisitive and filled with questions that we heroically try to find answers for.

Petty thug Michel (Jean-Paul Belmondo) considers himself a suave bad guy in the manner of Humphrey Bogart, but panics and impulsively kills a policeman while driving a stolen car. On the lam, he turns to his aspiring journalist girlfriend, Patricia (Jean Seberg), hiding out in her Paris apartment while he tries to pull together enough money to get the pair to Italy. But when Patricia learns that her boyfriend is being investigated for murder, she begins to question her loyalties.

As the city of Paris and the French people grow in consumer culture a housewife living in a high-rise apartment with her husband and two children takes to prostitution to help pay the bills. The film does not tell a story so much as present an essay-like study of Godard’s view of contemporary life; Godard wrote that “I wanted to include everything: sports, politics, even groceries. Everything should be put in a film”. Godard himself narrates the film in a whispered voice-over that discusses his fears to the audience about the contemporary world, including the Vietnam War. The film often cuts to various still shots of bright consumer products and ongoing construction.