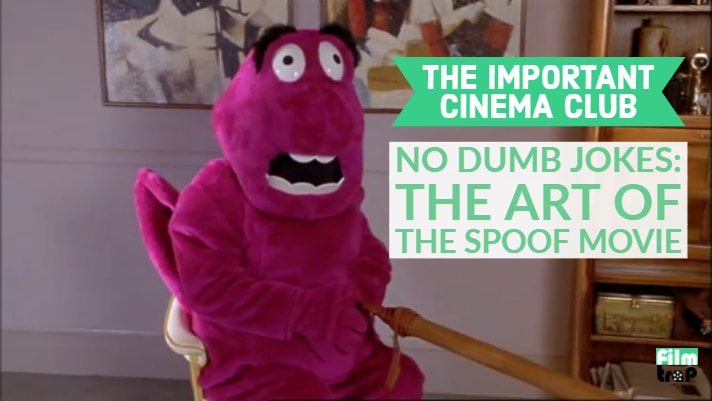 We discuss the Spoof Movie genre, with an emphasis on ZAZ (David Zucker, Jerry Zucker, Jim Abrahams), the people who brought us the MOVIE movies (Aaron Seltzer and Jason Friedberg) and everything in between – Fatal Instinct, Plump Fiction and Stan Helsing.

Top Secret, Airplane, Meet the Spartans, Mafia! and Epic Movie all get their time in the sun.

On this week’s Patreon episodes, we discuss Super Troopers and the Broken Lizard Comedy troupe.

Airplane! (1980): “This spoof comedy takes shots at the slew of disaster movies that were released in the 70s. When the passengers and crew of a jet are incapacitated due to food poisoning, a rogue pilot with a drinking problem must cooperate with his ex-girlfriend turned stewardess to bring the plane to a safe landing.” – IMDB

Top Secret! (1984): “Popular and dashing American singer Nick Rivers (Val Kilmer) travels to East Germany to perform in a music festival. When he loses his heart to the gorgeous Hillary Flammond (Lucy Gutteridge), he finds himself caught up in an underground resistance movement. Rivers joins forces with Agent Cedric (Omar Sharif) and Flammond to attempt the rescue of her father, Dr. Paul (Michael Gough), from the Germans, who have captured the scientist in hopes of coercing him into building a new naval mine.” – IMDB

Mafia! (1998): “This zany spoof of gangster movies charts the rise and pratfalls of the Cortino crime family. After growing up poor in Salmonella, Sicily, Vincenzo Cortino (Lloyd Bridges) installs himself as the preeminent, if bumbling, Mafia don of the New World. But now he must pass on power to one of his two sons: either level-headed veteran Anthony (Jay Mohr) or vituperative loose cannon Joey (Billy Burke). The resulting power struggle leads to betrayal, murder and Scorsese references galore.”

Meet the Spartans (2008): “The heroic Spartan king Leonidas, armed with nothing but leather underwear and a cape, leads a ragtag bunch of 13 Spartan misfit warriors to defend their homeland against thousands of invading Persians whom include the Ghost Rider, Rocky Balboa, the Autobots, and an ugly hunchbacked Paris Hilton and a shaved-head Brittany Spears.” – IMDB

Justin’s Top Six Spoof Movies That He Didn’t (or Barely) Mention on the Podcast Episode: