Under the Shadow – Review

The more I write about movies, the more it will become obvious just how much I love creepy ghosty horror movies, even though I can’t actually handle them when I have to go to bed and turn off the lights. I am terrified of see-through ghost people staring at me from the corner of my room or popping up behind me like a real-life jump scare! And yet I continue to subject myself to scary movies as often as possible because I just fucking love them.

Under the Shadow, a film by Babak Anvari has entered the realm of scary movies I love, and it’s out on Netflix, so it can also be in yours!

A lot of people have compared it to The Babadook and certainly it has a lot of similar themes throughout. The monsters are a little different and they manifest a little differently as well. In fact I’d probably liken the monsters in Under the Shadow to Godzilla, an allegory for war, but I’m getting ahead of myself here. 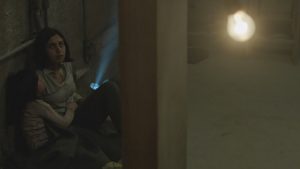 In the midst of a war between Iran and Iraq where bombings were expected daily, a mother, Shideh (Narges Rashidi) tries to enter back into university after being politically active on campus which resulted in her educational demise. She was studying to be a doctor in a once progressive Iran. Her husband (Bobby Naderi)is conscripted off to war leaving her alone with her daughter (Avin Manshadi) in their apartment. All of this sets the temperature for a woman frustrated with the war, politics and her dreams of becoming a doctor in the hands of conservative men.

A new kid shows up in the family’s building, (a cousin of a neighbour) and of course he’s a scary little boy who saw his parents die and is all kinds of creepy. He makes friends with the daughter and then she starts acting weird and gets a fever. The whole building starts talking about Djinn, which are a type of ghost. Obviously Shideh doesn’t believe in the Djinn and thinks that everyone is nuts. She is a pragmatic almost-doctor after all, and she’s relating their experiences to the horrors they’ve been experiencing as a result of the war.

I love how pragmatic Shideh is throughout, that’s how I like horror movie characters to behave. I may or may not be the kind of person that yells at the characters on the screen (silently) to “not open that door!” And I think that’s how the movie can take the concept of the Djinn so far. Almost everybody else leaves because they’re afraid of the Djinn that are taking over their building, but Shideh is 100% sure that they’re not there, emphasizing her stubbornness and tenacity.

So why should you watch this movie? Well I won’t give it away but suffice to say that you will be thoroughly creeped out by the majority of the elements I mentioned above. It’s a tense movie, makes you feel like you wish you could help. It will also make your heart beat really fast.