WATCH: The LOST version of Doris Wishman’s A NIGHT TO DISMEMBER 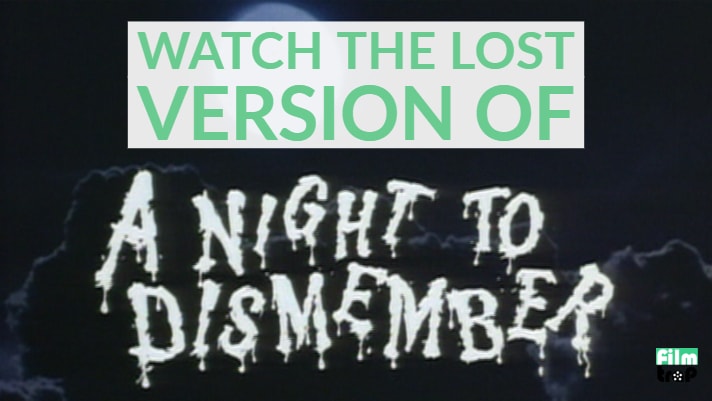 For years, the original version of Doris Wishman’s gonzo horror masterpiece A Night to Dismember was believed to have been lost. The legend goes that the original negative was destroyed in a fire, so Writer/Director Doris Wishman was forced to go out and shoot an entirely new version of the movie from scratch. The end result was a jaw-dropping nightmare of a motion picture that has gone on to become a top-tier cult classic. The only traces of the original version existed in a pre-release trailer that Doris Wishman had put together to raise the finishing funds. Many people believed that an original version may have never even existed at all.  Perhaps, it was all just a made up story to garner sympathy and money. There was no way to know the truth.

Ben Ruffett, the programmer and founder of The Hamilton Trash Cinema, has uploaded the original version, the one believed to have been lost in a fire, to Youtube.

A few years ago, Ben contacted the second version’s cinematographer C. Davis Smith looking for a copy of Dismember on VHS to play at a screening. Unfortunately, the C. Davis Smith didn’t have any copies of the official VHS release, which are extremely rare, but he did have a copy of the original version on tape. The one that every history book claimed was lost in a fire.

I have no idea how this has never been discovered before, but thanks to Ben’s sleuthing and generosity, the world can finally watch a film that had been believed to be completely lost to time.

You can watch the original right now:

If you’d like to know more about renegade Writer/Director Doris Wishman, we recorded an episode of THE IMPORTANT CINEMA CLUB podcast dedicated to her work:

Below, you can find the letter C. Davis Smith included with the Video.

Sadly, C. Davis Smith passed away in September of 2017.

You have in your hands a rare copy of the “LOST” version of “A NIGHT TO DISMEMBER.”

I only know of three other existing copies of the film. One to a friend in Manhattan, one to another friend in Pennsylvania and the copy I have. Now you are among the elite (sic) to join the club. (There are no benefits!)(Unless it is possible nightmares!)

The story according to the Gospel of Doris is that a disgruntled employee of MovieLab, (the film processing company in which all the processing and printing work was accomplished) ruined much of the negative to the original version. “WHY” has never come to the forefront of our knowledge. (Or even IF !)

Somehow the film was distributed in Europe in the original version. A lot of people are unaware of this. I have a friend who saw it in Europe years ago when it first came out. (A film nut!) My information could possibly be conjecture. But I have seen paperwork from the distributor of the film showing that at least one print was sold as European Rights.

I did not shoot all of the first version. Doris called me one day and said that she had half of a film shot but she didn’t want to work with THAT cameraman again. ( I have no idea who it was!) She TOLD me that the title of the film was terrific and didn’t I think so? (Of course, I did!)

Actually, it was a good title as it subconsciously recalled A NIGHT TO REMEMBER that rolled around in many filmgoers heads. We shot the film and it was as disjointed as any Godard film cold be….OOPS! I mean Doris film could be.

Flip wipe to the lab incident (???) era. Could I shoot some inserts for the updated version?

Of course, I could….and so we did. …ALL Samantha Fox material.

In the new version, there is no Introducer called Brain Matter ( Orson Wellesian type), no kids in the graveyard, and worst of all no shots of my son Christopher playing the big brother.

I think it would be a great double-bill to screen both versions back to back.

Thanks for the interest,
Chuck