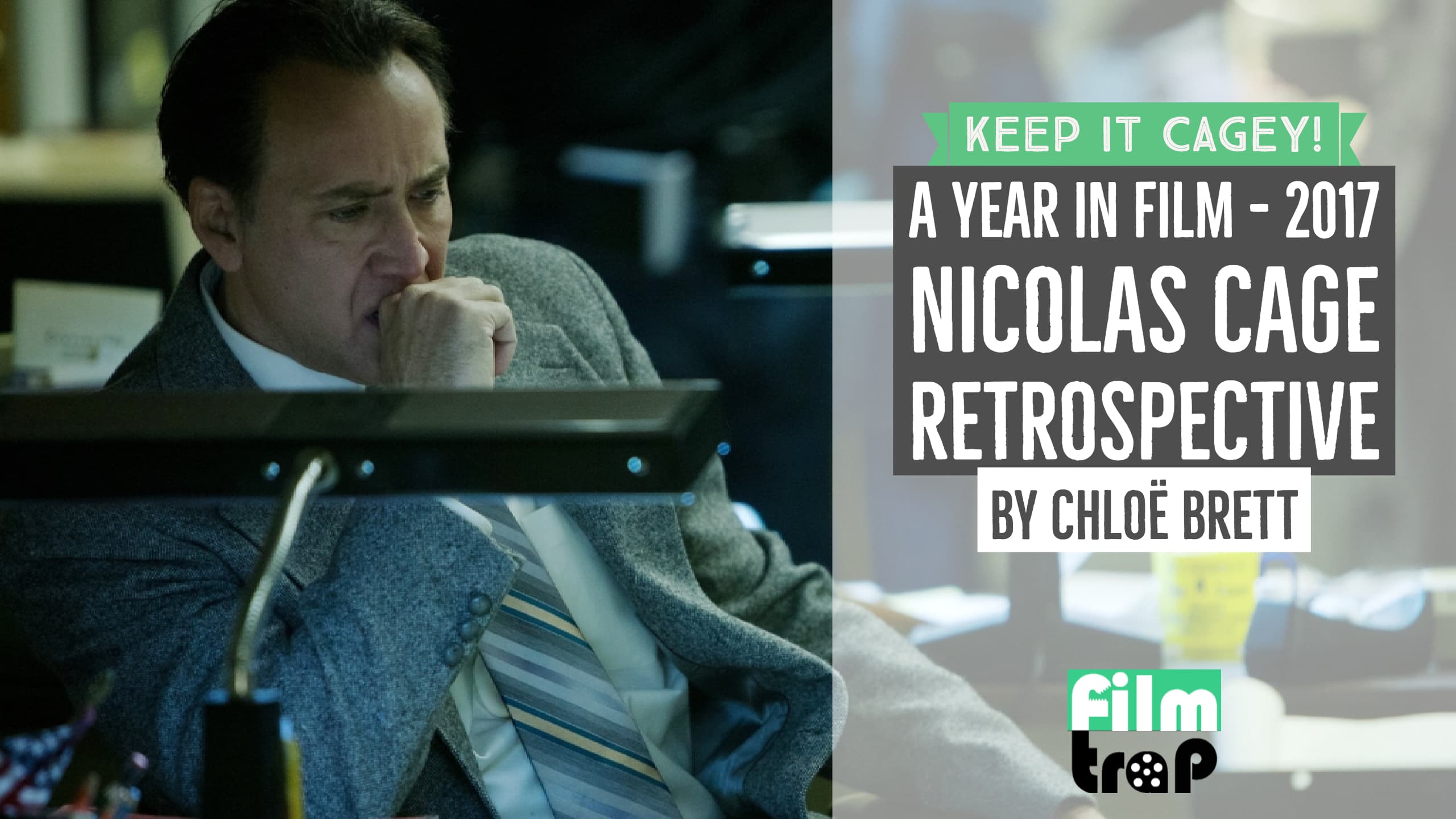 We all know James Franco is fast coming for Nicolas Cage’s throne but the king of “How Many Movies Did He Put Out This Year?” has yet to be knocked down. In the past 3 year Nicolas Cage has been in 13 films. That averages out to a new Nicolas Cage movie every 2.8 months…for three years. I kid you not, every few month when I think to myself, “Hey, shouldn’t there be a new Cage movie out soon?” within DAYS one appears. Most casual film watchers may not even be aware of this phenomena because the majority of theses films have gone straight to VOD while another couple made it into the prestigious Toronto International Film Festival… and then went to VOD.

Last year, out of the five Cage films that came out there were actually a couple of goodies: “Army of One” was a charming film that made it on to my “You Gotta Love Them” 2016 list, as did the straight up 90s style thriller “The Trust”. But 2016 is long gone and with 2017 also going the way of the dinosaurs it’s time to take a look back at just what Nicolas Cage has been up to.

First up is Steven C. Miller’s “Arsenal”. Nic wasn’t wasting any time in 2017, this was one of the first movies I watched in 2017 as it was released on January 6th (Happy New Year to me). Now, Cage isn’t in a ton of this movie but what does make it interesting is that he is, most likely, reprising his role of Eddie from “Deadfall“. I don’t believe it was ever officially confirmed to be the case or if Miller just said ‘fuck it’ and decided to do an unauthorized sequel, but either way, it’s the only reason to watch this otherwise unremarkable movie.

All of Cage’s scenes are super fun to watch and there’s actually some really cool cinematography but for the most part I can’t even remember what happens in this film other than the super generic plot of two criminal brothers, one reformed and one still being a little shit and crossing Cage with disastrous consequences. John Cusack is also reprising his role of every character he’s played for the last five years: man in car wearing aviators and a ball cap. 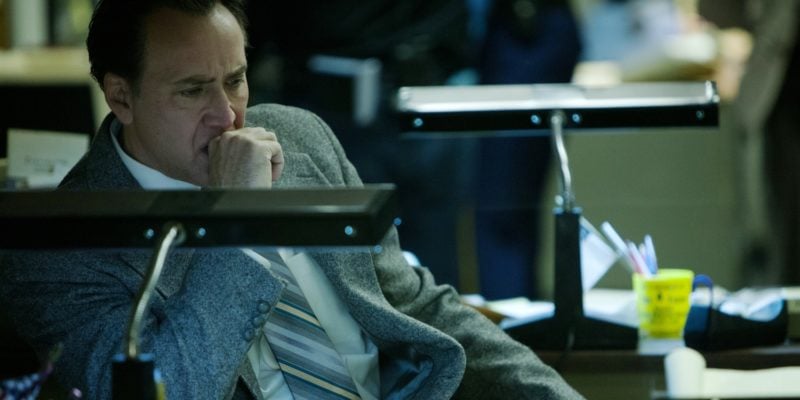 Now anyone familiar with my writings on film, or just me as a person in general, knows that I watch a lot of movies and I tend to forget about 50% of them as a result. And so we come to film two of the year, “Vengeance: A Love Story”, directed by Johnny Martin (who predominately works as a stunt coordinator).

Do I remember watching this movie? No. I’m I going to try to talk about it anyway? Yes, yes I am.

After reading the incredibly vague one sentence synopsis I decided to watch the trailer to help jog my memory. Let me tell you, I sure don’t remember Don Johnson being in this. While I still can’t fully describe or recall ANYTHING about this movie the trailer gave me enough to go on which is that Cage plays a cop who goes vigilante after a group of rapists get out of going to jail. He most likely shoots a bunch of them directly in the face. I’m sure he gives it the old college try and delivers a decent performance, other wise this is probably one that you can give a skip. 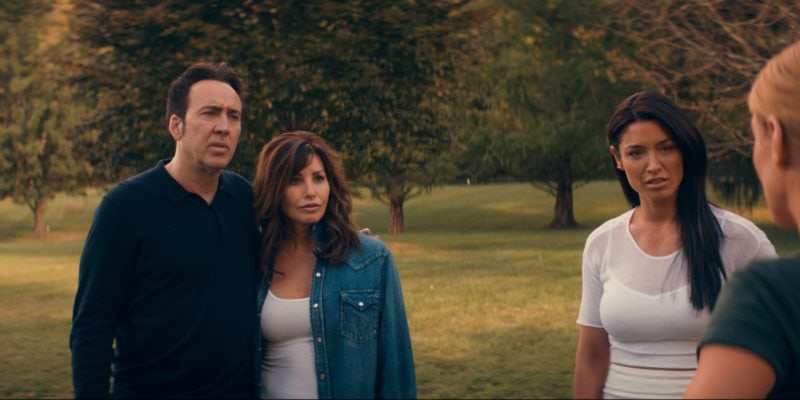 Jonathan Baker’s “Inconceivable” is basically what my dreams are made of. Cage and Gina Gershon playing a surprisingly age appropriate couple who are on the hunt for a surrogate, who yes, inevitably tries to convince everyone that Gershon is crazy so she can steal her life. I’m a pretty big lover of evil surrogate/“Obsessed” type films because no matter how hard they try, they are always, always incredibly silly and way over the top.

What I appreciate about this film is that even though Cage is there, he’s not an overbearing presence, this film is really about the struggle between Gershon’s character and the evil/mysterious surrogate, played by Nicky Whelan. Cage is more there to be something for Gershon to lose and Whelan to… I guess lust after? He’s really just playing a normal dad which is a nice change of pace.

Just because a movie is insane and Nicolas Cage happens to be in it, doesn’t mean he has to be the most meme-worthy version of himself. This movie is very fun for a whole ton of reasons, and while I’m glad Cage is there, it’s nice that he’s more of a background figure.

And as an added bonus, Faye Dunnaway plays Cage’s boozy mom and has the funniest dialogue. 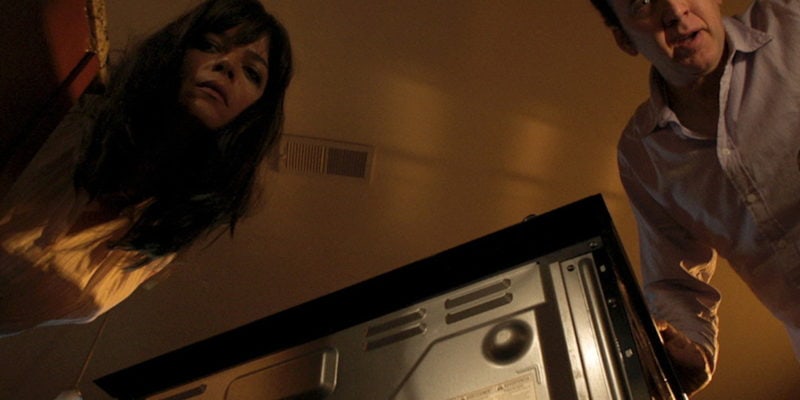 I felt so weird after watching Brian Taylor’s “Mom and Dad” at TIFF. The experience of watching it has stuck with me way more than the actual movie. Standing 10 feet away from Nicolas Cage before the movie started made me feel really weird and sort of set the tone for the rest of the evening. It also didn’t help that there was a man who literally sounded like a cawing bird when he laughed every two seconds for the entirety of the film.

My general thoughts on “Mom and Dad” are that is was fine but really left something to be desired. When it first gets going there is tension, horror, confusion, but once the remainder of the film gets going, well, it doesn’t. Over half the movie takes place in the same location, which can work for some things, but in this instance it quickly became stale. I’m not saying that violence is good or that movies with violent premises can only be good if they actually show it, but we’re talking about Brian Taylor here and it really felt like he held waaaaay back, to his own detriment.

It was however really nice to see Selma Blair back up on the screen. Nicolas Cage on the other hand, as much as I love him, sometimes it’s hard to watch him in movies like this because it just feels like he’s feeding into what the internet has made him: an insane, jokey caricature version of himself and he’s just giving us the off-the-wall Cage performance we all expect. His performance in this was, for me at least, just way to much and frankly a little out of place in a movie that was weirdly muted. 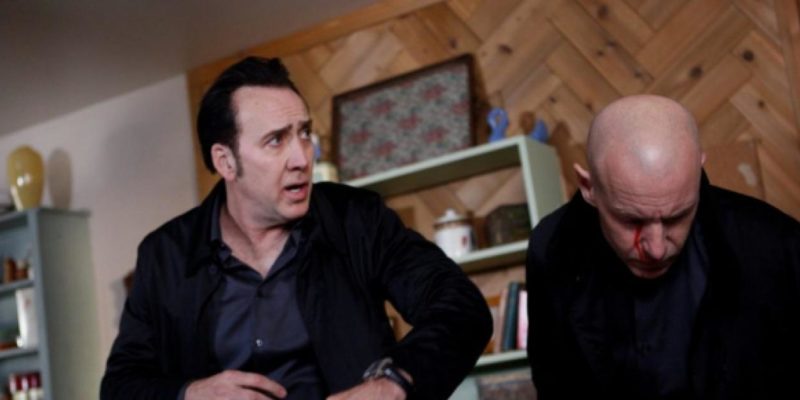 And so, we come to the final and cheapest Cage film of the year: Rob W. Kinn’s “The Humanity Bureau”.

I have seen 59 Nicolas Cage movies in my life and this is hands down the most budget, SyFy channel looking one I have ever seen.

[bctt tweet=”I have seen 59 Nicolas Cage movies in my life and ‘The Humanity Bureau’ is hands down the most budget, SyFy channel looking one I have ever seen. – Chloë Brett” username=”filmtrapforever”]

I mean, they couldn’t even get Callum Keith Rennie to be in it, Hugh Dillon is the bad guy for cripes sake! As per usual, Cage is playing a cop-esque character who decides to go rogue to protect a mother and child who are very obviously going to be sent to some sort of gas chamber place because it’s the sci-fi future and that’s what happens.

I don’t even know what to say about this movie. It’s cheapness was so off-putting, and trust me, you can make a really good looking movie with very little money so I have to chalk this up to no one really cared how well this turned out. Wanting to fall in the same realm as films such as “Equilibrium” or “In Time,” “The Humanity Bureau” doesn’t even come close to hitting the mark of a good dystopian film.

While Cage and Dillon managed to at least give good performance the rest of the cast is just abysmal. The young boy Cage is trying to save, played by Joe Swanberg look-a-like Jakob Davies, is possible one of the worst child actors I have ever seen in my life and was distracting to the point of not even being funny.

There are definitely a lot of unintentionally funny moments in this and some very poorly done green screen and while I don’t regret watching it, I don’t know that I could in good conscious recommend this to anyone. But hey, Lorne Cardinal shows up at the end so I’m glad he’s doing stuff.

So there you have it folks, the round up of Nicolas Cage movies that nobody asked for. 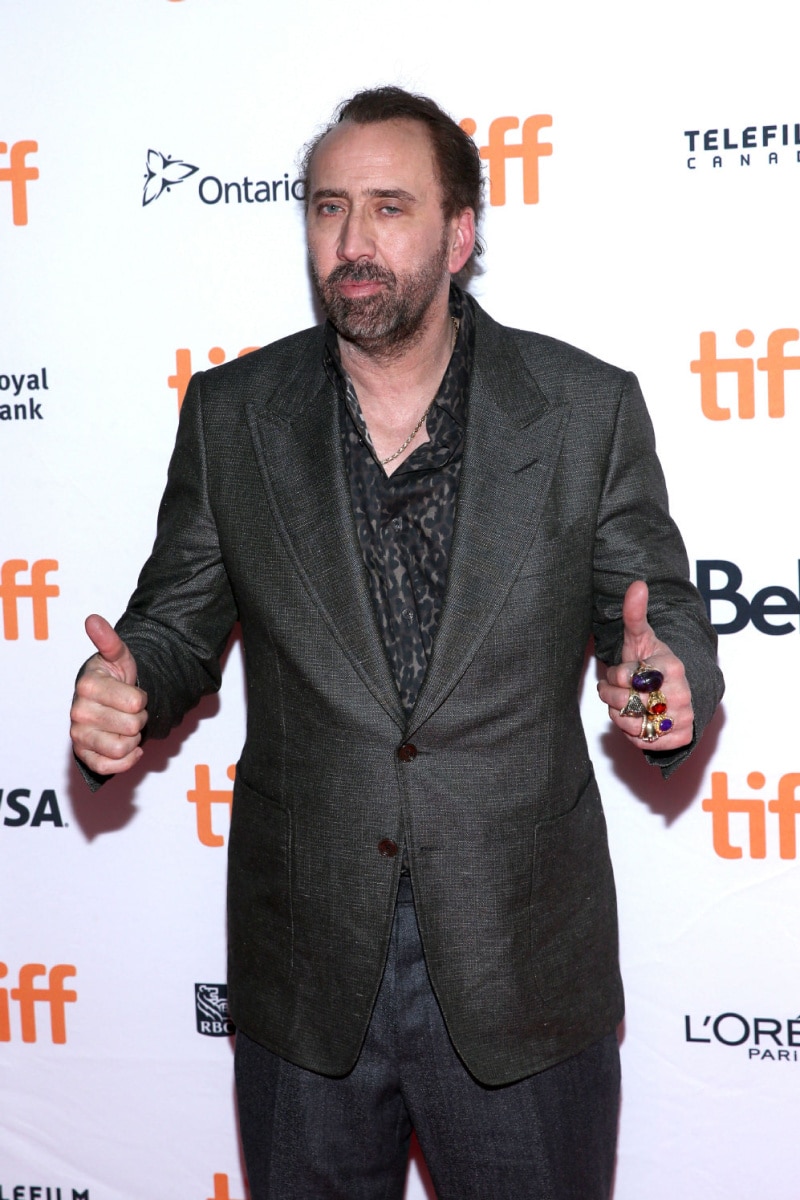 TORONTO, ON – SEPTEMBER 09: Nicolas Cage attends the “Mom and Dad” premiere during the 2017 Toronto International Film Festival at Ryerson Theatre on September 9, 2017 in Toronto, Canada. (Photo by Phillip Faraone/Getty Images)

[bctt tweet=”So there you have it folks, the round up of Nicolas Cage movies that nobody asked for. – Chloë Brett” username=”filmtrapforever”]

Was he mostly in a bunch of forgettable trash? For sure. But here’s the thing about Nicolas Cage: He’s a really good actor. Cage puts his all into every single performance he gives, regardless of the quality of the project, which is something I truly respect him for. No matter what the film I always enjoy seeing him on screen, he’s just undeniably captivating to watch. I pains me that people write him off as being some eccentric crazy man because in addition to it being insulting, I think it prevents him from being taken seriously and getting meaty and intellectually substantial rolls.

When given the opportunity Cage has been able to create so many iconic characters: Charlie and Donald Kaufman, H.I McDunnough, Terence McDonagh, Ronnie Cammareri, etcetera and I think he could make so many more if people would just flipping respect the guy. I’m glad he isn’t slowing down any time soon and with at least 3 to 5 projects currently slated to come out in 2018 you can be sure I’ll be back in 12 months with another run down.